THE FOLLOWING REVIEW CONTAINS SPOILERS FROM BOTH ‘BATMAN: THE KILLING JOKE’ COMIC AND THE FILM I’M REVIEWING TODAY. IF YOU’VE READ THE COMIC BUT HAVE NOT SEEN THE FILM (OR VICE-VERSA), PLEASE GO WATCH IT BEFORE CONTINUING TO READ.

Comic books. They’re a staple of literature and the superhero genre. They are often a kid’s introduction to their favorite superheroes, from DC Comic’s charismatic Superman to Marvel’s popular Avengers, comic books are fantastic gateways of fiction for many fans of superheroes. They don’t just have entertaining heroes and action, but good drama, complex characters, wonderful stories, and dark tones that give way to great stories.

Speaking of dark tones and great stories, care to guess what todays review will be focused on? You guessed it: the animated adaptation of Alan Moore’s “Batman: The Killing Joke”. Anyone who is a Batman fan like me knows the iconic story. This is the comic that reimagined the idea behind Batman and his relationship with the Joker, as well as the future lore of DC Comics. Television, film, video games, and even future comic books have taken inspiration from it one way or another, and what better way to help Mark Hamill retire as the Joker than make an animated adaptation of this? With an R-rating no-less?

Everyone loves the trailers and how amazing it looked, though I personally felt they spoiled the epic first laugh of the Joker. Much like the trailer of Subject #9, I was afraid they’d given away too much from the trailer. However, is “Batman: The Killing Joke” a good film?

For those (probably like four or five) of you who don’t know the story or haven’t seen the film, “Batman: The Killing Joke” is a one-shot comic where the Joker has escaped from Arkham Asylum (gasp!) and has kidnapped Commissioner Gordon after crippling his daughter right in front of him. The Clown Prince of Crime’s plan: to drive Gordon mad like him and prove to Batman that ‘all it takes is one bad day’ to turn the average human being into a lunatic like him. Driven to save Gordon, Batman must face madness and himself in order to save not just himself and the commissioner, but hopefully the Joker too.

As this happens, we see flashbacks regarding the Joker’s (probable) past before he was driven mad; prior to his transformation, he was a nameless engineer who quit his job to become a comedian, but is having trouble supporting his pregnant wife. 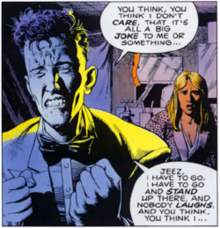 Add a few mob bosses and one bad day, and we’re given a glimpse into what led this poor soul to become the murderous clown that terrorizes Gotham. Will Batman save the Joker, or will he fall into the abyss?

Did the animation team want to waste 25 minutes of screen time on reestablishing Batgirl’s role?

Ever since its release at the San Diego Comic-Con, “Batman: The Killing Joke” has gotten (surprisingly) mixed reviews online and I can understand why. If you’ve seen the movie like I have, you know about the wasted twenty-five minutes spent showing Batgirl being angsty toward Batman, a pointless mob villain to rival her, and an unneeded sex scene between the Dark Knight and his pupil. I can understand that the people working on this felt like “The Killing Joke” wasn’t that long of a story for an hour and a half, but good God this was pointless!

The first third of the film felt less like an adaptation of “Batman: The Killing Joke” and more like a segment from that bad “Justice League vs. Teen Titans” animated film. We got a whiny teen wanting to be acknowledged as an equal by her brute teacher, a love interest with said teacher, all culminating to an intense fight scene more pointless than in Jabba the Hut’s Palace.

If they wanted to have Batgirl be more prominent in the film, you wanna know what would’ve been a good idea? Why not have had it where Batman is searching for Joker, Batgirl enters the film, tries to find Joker with the Dark Knight while fighting a couple of bad guys involved with the Joker’s scheme, and goes back home to her father before being shot? Don’t you think that would’ve been better than seeing Batman and Batgirl having an unseen sex scene?

Speaking of that, here’s another personal problem with the film I have: it isn’t exactly an R-rated film the more I think about it. Granted, the original comic itself was pretty graphic and disturbing, but it came out during the mid-eighties. Not that many comics, especially Batman comics, really dived into the disturbing bond between the Dark Knight and the Joker before, or even had gory moments like this.

It feels like the film’s second-biggest problem is that it feels too faithful to the source material. When adapting a comic book into a film, especially an R-rated film, you have to take risks and change things from the original story in order to reach the audience of filmgoers. They don’t have the characters swear outside of ‘Goddamn’ and ‘shit’; there isn’t even one single ‘f*ck’ given (literally XD) in the entire film.

This is “Batman: The Killing Joke” dammit, give us swearing, give us new disturbing imagery on par or greater than the source material, and don’t give Batgirl this teenage angst that we’ve seen from other films! She doesn’t even sob when she wakes up in the hospital, and it doesn’t make me feel terrible for her the way I should be!

Whew…Wow. So yeah, I’m guessing you think that I hate this adaptation then huh? Actually no, I don’t to be honest. I don’t hate it, and I don’t even dislike it as a film on its own. In fact, I dare say that despite the first third and the fact it doesn’t have as much graphic content as I want it to have, the animated film “Batman: The Killing Joke” does its damn best to be a faithful adaptation of the comic throughout the rest of the movie.

Sure the artwork isn’t as good as Alan Moore’s, but it’s still great animation on par for a gothic story such as this. The voice-work is absolutely amazing; Kevin Conroy as Batman, Mark Hamill as the Joker, and hearing them recite the words from the comic book is an unbelievable experience. The angles, the visuals, and the way these two fantastic voice actors work with each other is something to watch for any Batman fan. The maze scene alone in the film sent chills down my spine, as well as Hamill’s voice as he does the infamous monologue everyone quotes in a psych class.

Probably my most favorite addition to the monologue scene is having the final confrontation take place in an upside down replica of the unnamed engineer’s apartment he shared with his wife before becoming the Joker. Not only is it extremely clever and funny with how Joker attacks Batman, but it adds to the Joker’s backstory as one of myth. Was the Joker’s backstory a part of his imagination after seeing this apartment, or is it just a coincidence?

“If I’m going to have a past, I prefer it to be multiple choice! Ha ha ha!”

Even the flashbacks to the Joker’s past aren’t half bad. Mark Hamill does a good job of hiding his voice, yet we clearly see this is the man who will one day become the Joker. We witness his meek personality, how close he is towards insanity, and feel our skin crawl when he emerges from the toxic slime.

And then we have the ending. Aside from an ending credits scene that feels like an add-on for an unneeded sequel, the last few minutes are a true sight to behold. Whether or not you’ve seen the Animated Series, seeing Conroy’s Batman and Hamill’s Joker talk to each other like old friends, standing in the rain as one offers the other help, and listening to the ‘Killing Joke’ that leaves an ambiguous ending…my God is it wonderful to witness.

Overall, “Batman: The Killing Joke” animated film is…a good movie. Sure the first third is god awful but the last two-thirds make up for it in every single way. The introduction scenes are bad, but the stuff that’s good in the film is really f*ucking good to watch. It’s isn’t the greatest Batman film out there, but it is a definitely on the top five list in my opinion. As soon as this comes to DVD, get yourself a copy and have a barrel of laughs everyone! 😀