Some of you younger readers may have never heard of her, but Laurie Halse Anderson was a pretty big name in the YA genre industry. She was iconic before Suzanne Collins wrote “The Hunger Games” and around the time the “Twilight” saga started gaining popularity. Publishing her first book in 1999 called “Speak”, about a thirteen year-old mute girl dealing with the tragedy of a sexual assault, Anderson started earning ground as a solid author before long. She gained popularity among teenagers and young adults due to her novels tackling social issues which back then were almost taboo to read about in high schools. And then, she published “Twisted”, a book that features her first and only male protagonist among her previous works.

Man, this is a book I’ve been wanting to talk about on this blog for a very long time. Whether or not you know Laurie Halse Anderson and her work, I will still highly recommend this novel to anyone who wants to read a no-nonsense story about (justified) teenage angst, depression and the hard truths about growing close into adulthood. “Twisted” is controversial, has a foul-mouthed protagonist, talks brilliant commentary on teenage rage and society’s definition of normal, and all while following a teenager who distinctly reminds me of Holden Caulfield for some reason. The best way I can best describe it is in two words and I quote: “Brutally honest.”

The story is about a senior named Tyler Miller, who is currently on probation after vandalizing the high school. Although he’s no longer the outcast and is garnering the attention of rich queen bee Bethany Milbury (whose father is the CEO of Tyler’s disgruntled dad) this gets Tyler on the bad side of Bethany’s pompous, sociopathic twin brother Chip. Add a dysfunctional family where Dad yells, Mom secretly drinks to help migraines, and his sister Hannah trying to survive entry into high school, and Tyler has enough on his shoulders.

However, as his senior year gets better with Bethany and him dating more, all of this glory comes to a crashing halt after leaving a party. Nude pictures of a drunk Bethany have circulated online, leaving Tyler as a prime suspect by the school and his peers. Bullied into a pariah as the police investigate, Tyler reassures himself he never touched Bethany as his depression grows deeper and the world turns against him. Left with only his dysfunctional family and his Star Wars-obsessed friend ‘Yoda’, Tyler must make a series of important decisions that will either turn him toward a content future or an adult life of regret and mistakes. Will he make them though?

In my opinion, this is what “Catcher in the Rye” should’ve been! If you remember my review of the American classic, you might recall how I didn’t like the book due to how it’s basically about a teenage boy whining about his life…and that’s it. Unlike Holden Caulfield though, Tyler Miller’s actions and feelings about his life are justified one way or another. Unlike “Catcher in the Rye”, the protagonist here didn’t grow up in a life of luxury. He grew up in a lower middle-class home with a miserable mother and a tempered father. Whatever Tyler’s father says goes, his way is the right way, period.

It also helps that the plot is more connected to the main character’s turmoil. We already know that Tyler is innocent in the incident, but the book focuses less on the mystery and more on the protagonist comprehending his decisions that led him here. All his life, Tyler’s felt displaced as an individual in his so-called happy family. Behind the façade his parents try to make of suburban normalcy, Tyler’s lived as a background character while others tell him what to do.

What makes him such a well-written fictional character is how Anderson makes him such an identifiable personality. He’s overtly cynical, a former nerd passionate about games, depressed to the point of always imagining his death, a teenager with raging hormones but has moral standards with girls. And after vandalizing the school and becoming popular among his peers, he becomes something he’s always wanted to be; he’s the likable badass, the guy with the hot girlfriend, the perceived badass with his own probation officer. But when everyone turns against him, Tyler’s left along with his suicidal thoughts and no idea what to do. Seeing this guy suffer leaves you empty and sorry for him.

The other characters leave an impact as well. Hannah serves as Tyler’s little sister with a cynical but kind personality to reflect her brother, Tyler’s mother is a good balance of frustration and maternal kindness, Bethany’s a queen bee with a sophisticated sense of humor, Chip’s a prefect who doesn’t hide being a jackass, and Yoda is a very geeky but endearing best friend that helps Tyler though this.

Tyler’s father is especially complex, a white suburban man who has the ill-tempered fuse of a bull, the desperation of an ass-kissing businessman you see in bureaucratic offices, the over-controlling pride of Lois Wilkerson, and the American patriarchal discipline of Red Forman.

God, could you imagine a crossover between “That 70’s Show” and “Malcolm in the Middle” where Lois and Red compare their parenting skills?

That’d be either really cool or downright terrifying! 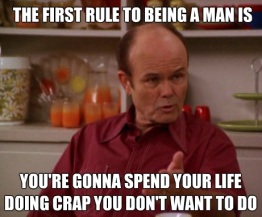 Anyway, what makes this father different from all of the other strict dads you read about in dysfunctional families is how he’s no-nonsense toward Tyler yet retains humanity. He’s not like the soulless Commandant from “An Ember in the Ashes” where he completely ignores his son like thrown away trash. He cares deeply for his son and daughter’s success, sucking up to a mean boss and giving his sanity away; he even stands up for Tyler when he’s suspected by the cops and goes far as to accuse the police of planting fake evidence on Tyler just to get their culprit. He has to either be the best or worst father of the year.

The way Laurie Halse Anderson presents everyday American teenage life in “Twisted” is also such a pessimistic delight. The way Tyler describes his surrounding and how mundane everyone around him sees life makes you relate completely, from the moments of teens doing childish things to the gritty truth about adulthood. Like I said, “Twisted” is brutally honest in a sick, twisted kind of way you have to admire. There’s swearing, adult innuendos, and it all gives the story its own style of pessimistic teenage rebellion.

If I had any problems, it would be how some things are left alone in “Twisted”, such as the outcome of Bethany and Tyler’s relationship after all of this madness is over. The last time we see her there are hints, but it never leaves any solid impacts. Also, there’s this strange relationship between Yoda and Hannah that starts off as cute and well-developed more than Tyler/Bethany, but it’s also left a bit vague by the end of the story.

Speaking of endings though, “Twisted” also has what I consider the MOST INTENSE CLIMAX EVER. I cannot give much away without spoiling anything, but it’s close to the end of the book and a few huge revelations have been made to Tyler. Then, his father comes home at his lowest moment and is close to taking his wrath out on the family. Knowing what to do, Tyler decides to challenge his father.

This leads to a heart-stopping confrontation between father and son with the rest of the family witnessing the standoff. The way Tyler tells his dad how he plans to live his life and how Mr. Miller listens with a burning fuse makes you sweat and your fingers tremble with each turning page. You have no idea what the outcome will be, but you applaud and cringe in fear at what it will be. Written poignantly, printed at a pace that makes your heart tick faster, and carrying an atmosphere of eggshells under your feet, this scene dives into how much Tyler has grown throughout his chaotic life and family.

This is what makes “Twisted” one of my personal favorites in the young adult genre; it’s a mixture of grim teenage drama and pessimism drenched in black comedy. Thought-provoking and catering to teenage rebellion and finding yourself into adulthood, Laurie Halse Anderson’s “Twisted” is a brutally honest book that will leave you thinking about your life as a teenager and the future.

You can purchase the book here: https://amzn.to/2Ewr3y0